This lesson plan introduces young Friends to Howard Thurman (1899-1982), African-American religious leader, writer and philosopher. Although Thurman was not a Quaker, he became a close friend of Quakers in the course of his work. His writings have been published by Friends United Press and read by many Quakers.  Thurman’s preaching on love and nonviolent resistance influenced Martin Luther King.

A YouTube excerpt from a Landrum Bolling, former president of Earlham College, interview with Howard Thurman 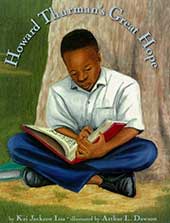 Howard Thurman’s Great Hope by Kai Jackson Issa. Available from a public library or for purchase.

Born in segregated Daytona, Florida, in 1899, Howard Thurman grew up dreaming of a better life a life where his mother and grandmother would not have to cook and clean for other people; a life where he could become a college man, honoring his late father s wishes and his own dreams. Through hard work, perseverance, and the support of friends and family, young Howard transcended the limits on Negro education in Daytona and earned a scholarship to an out-of-town high school. His dream did not come easily and was nearly lost, until a kind act by a stranger at a railroad station aided Howard in a time of need. A moving testament to the bonds of community and the power of faith, Howard Thurman’s Great Hope illuminates the early life of the man who became a seminal civil rights leader and an inspiration to the nation. —Goodreads Synopsis