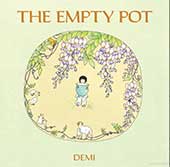 Honesty and integrity can often require real courage of us! In this classic Chinese children’s story, we learn once again that “Honesty is the best policy.” Ping was a young schoolboy who loved to grow flowers. He embraced the Emperor’s challenge to grow the best flower. The Emperor was old and devised this competition as the best way to choose his successor. He passed out seeds and told the children to return in one year with their flowers. Ping had always had success growing beautiful flowers but this time, no plant grew at all! He began to panic but his parents assured him that his best would be good enough and to take his best effort to the Emperor. Other children produced colorful, dramatic flowers and Ping had only an empty pot to show for his efforts! But, all is well in the end! The Emperor had boiled all of the seeds, so no flower or plant should have grown at all. The best candidate for the next emperor would be the one with the courage to withstand the truth!