Stand Your Ground: The Life and Accomplishment of Paul Robeson 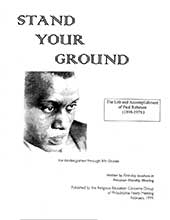 Three lessons on the life and accomplishment of Paul Robeson (1898–1976), in commemoration of the 100th anniversary of his birth. Contains ideas for how to recognize and use our talents and how to gather the courage to stand up for what we, as Quakers, believe. Written by First-day teachers in Princeton Monthly Meeting (Philadelphia YM) 1999.

This curriculum was created by a group of First-day school teachers in Princeton (New Jersey) Meeting in the weeks leading up to the celebration of the centennial of Paul Robeson’s birth on April 9, 1898. It was designed to be used by the First-day teachers prior to the 1998 centennial to honor the life of an extraordinary African American who lived in Princeton, NJ and went to college at Rutgers University. Even though Chapter 2 talks about the Quakers in Paul Robeson’s mother’s family, the authors did not intend to imply that those were the most important influences in Robeson’s life. The authors realize that Robeson’s mother, Louisa Bustill, died when Paul was young and that he was not very close to his mother’s family. Instead, Robeson was close to his father, William Drew Robeson, whom Paul tried to emulate throughout his life.